He has therefore expressed appreciation to him for his service and indicated that a substantive replacement for him will soon be announced while the Deputy Auditor-General, Johnson Akuamoah Asiedu continues to work as the acting Auditor General.

In a letter dated March 3, 2021, Nana Akufo-Addo, through his secretary, Nana Bediatuo Asante said, “The attention of the President of the Republic has been drawn to records and documents made available to this Office by the Audit Service, that indicate that your date of birth is 1st June 1960 and that in accordance with article 199 (1) of the Constitution, your date of retirement as Auditor-General was 1st June 2020.”

“Based on this information, the President is of the view that you have formally left office,” the letter from the presidency said. 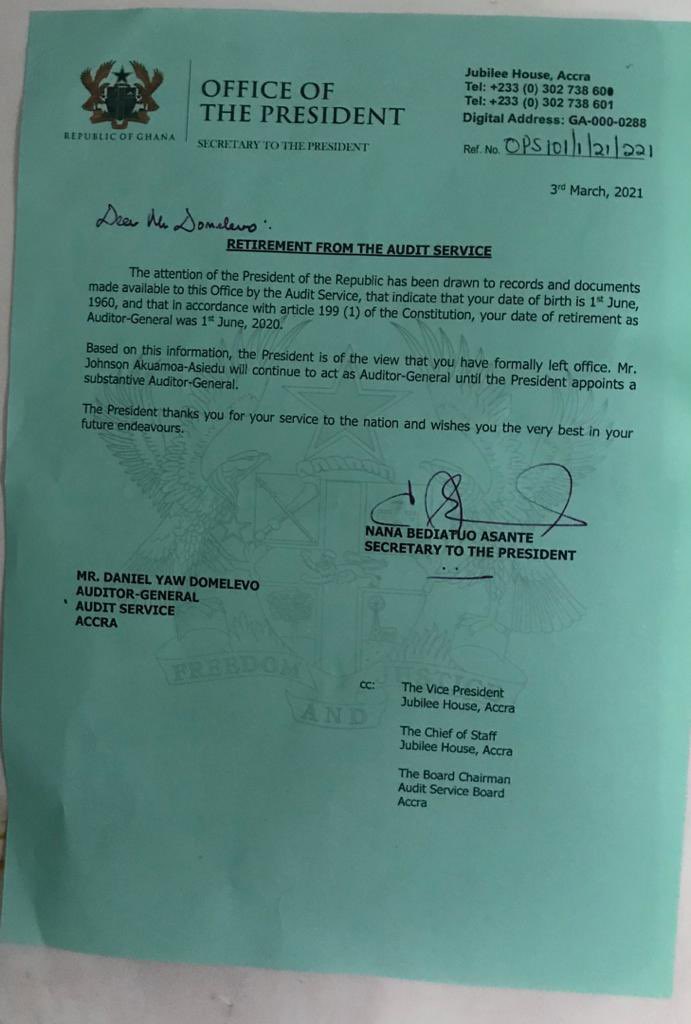 Daniel Domelevo recently became a subject for many news discussions after a series of correspondence between himself and the Audit Service Board came to the fore.

The correspondence showed that the Audit Service Board believes Mr. Demelevo is not a Ghanaian but a Togolese and also that he is a retiree because his date of birth is 1st June 1960.

Mr Domelevo has duly informed the board that the two allegations are false and offered explanations to defend himself.

But the board said the explanations are untenable and considers Domelevo as a retiree, barely a day before he returns to work after over 160 days of compulsory accumulated leave.

The Board indicated in its last letter that it had written to President Akufo-Addo to take the “necessary action” based on the information provided.

Mr Domelevo despite the controversy, reported to his office earlier today, Wednesday, March 3, 2021, but did not make any public comments about the development.